One of my colleagues at work is setting up a greenfield vCenter deployment with the addition of NSX v6.4.3. He hit an interesting problem recently that involved custom certificates and the Lookup Service.

In the end it required a call to GSS to resolve but I thought I would document the issue in case someone else hit it.

There were two vCenter Appliances with embedded PSC’s running in Enhanced Linked Mode both v6.7 Update 1. Custom certificates from an internal PKI had been applied to the vCenters in Hybrid Mode

This was working well and no reported issues. Next up was to integrate NSX v6.4.3 into the environment.

When logged into NSX Manager the issue occurred when trying to add it to the VCSA Lookup Service. The following error was shown: 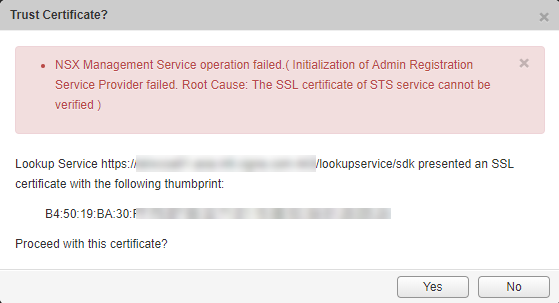 That was interesting to note was the Thumbprint presented did match the custom certificate deployed in vCenter.

NSX Manager was joined to vCenter successfully. No matter what was tried we could not get NSX Manager to connect to the lookup service.

I posted the issue we were facing in the vExpert Slack NSX channel and the awesome Laurens van Duijn happened to be experiencing the same issue. Two vCenter 6.7 U1, linked mode, and NSX 6.4.4. He did a lot of troubleshooting on this. He said he had done the same process lots of times but the difference in this case was this was the first time on 6.7U1 and an embedded PSC.

Wesley Geelhoed also did some testing and deployed the same setup from scratch, but without deploying custom certificates. NSX Manager could connect to the Lookup Service successfully. The Custom Certificates were the smoking gun.

Finally Iain Worsfold chimed in on the conversation. He had experienced a similar issue and had to engage support to resolve the issue.

The preventative solution is to join NSX Manager to vCenter and the Lookup Service before deploying any custom certificates. In our case we didn’t want to blow away all the work completed already so we opened a case with VMware Global Support Services.

The cause of the issue is the certificate tool in vCenter/PSC did not replace some of the many certificates properly. GSS ran a tool called ls_ssltrust_fixer.py that scanned for the suspect certificates and replaced them correctly. After that NSX Manager could connect to the Lookup Service.

We got the issue resolved but having to engage Support is not ideal. There must be an issue with the Certificate tool in vCenter that needs to be resolved. I am sure we will not the only ones that will have this issue. To be honest I’m not the only one that thinks Certificates in vCenter have always been a nightmare to deal with. Something to work on VMware!

I want to say thanks to Laurens, Wesley and Iain for the assistance. It’s another example of the amazing vExpert Community helping out. Having access to the community via Slack is one of the most valuable benefits of being a vExpert.