I am starting to get back into Ansible and wanted to setup AD Authentication from the control node (Ubuntu 20.04) to my Windows 2019 domain. The Ubuntu VM has a DHCP IP from the Domain Controller and DNS resolution is working correctly:

I read a couple of articles on how to do this but could not get authentication to work. I finally saw my error and so thought I’d document it here.

The first thing to do it install the package to enable Kerberos authentication:

This installs the package then prompts for you to enter your default Kerberos realm aka the domain name. In my lab this is corp.contoso.com: 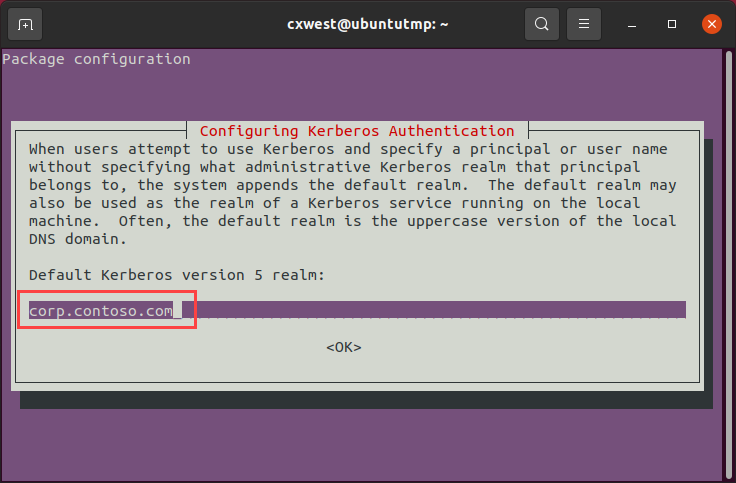 I then tested by trying to authenticate using the kinit command and passing my admin credential:

So we can see it it picking up the domain in the username ok, but not throwing an error.

Next I found there was a configuration file for setup of Kerberos called krb5.conf. I did some research using links such as to see if I was missing something:

Opening this file I could see under [libdefaults] the domain name I entered above:

Next I started looking at the options for the [libdefaults] section and settled on this:

What do these options mean?

I’m not a Kerberos expert but the options seem reasonable so I used them. More details for each option are in the links above if you want to delve deeper. I tried again to get a kerberos ticket:

So after extensive Googling and changes to the configuration file I stumbled upon this post: Linux: Kerberos authentification against Windows Active Directory. by Michael Albert. I noticed my fatal mistake:

If the “KDC reply did not match expectations while getting initial credentials” error occurs, check your /etc/krb5.conf. Ensure that all Realm names are in upper case letters.

I changed my config file [libdefaults] section to this:

and then tried authenticating again:

No error message but nothing was returned. Was I successful or not? There is a command klist that can show your current tokens:

That looked good to me. However I wanted to test to make sure authentication was working as I hoped. On Michaels post he shows how to connect to a Windows server once you have a Kerberos ticket using a package called rpcclient:

First we connect to the my Domain Controller dc01.corp.contoso.com using rpcclient. The -k option makes it use Kerberos for authentication. You can see we are connected correctly. Then at the rpcclient prompt I ran a getusername as a further check. It all looks good now.

In my defence I’m a Windows guy and so not worried that much about case sensitivity. I do however when using Linux just make everything lower case to stay consistent. That was my downfall this time!

I hope this helps someone else experiencing the same problem.

My top 10 technology based podcasts in June 2021

Finding a bug in the new vSphere DSC release specific to one cmdlet in PowerShell 5.1